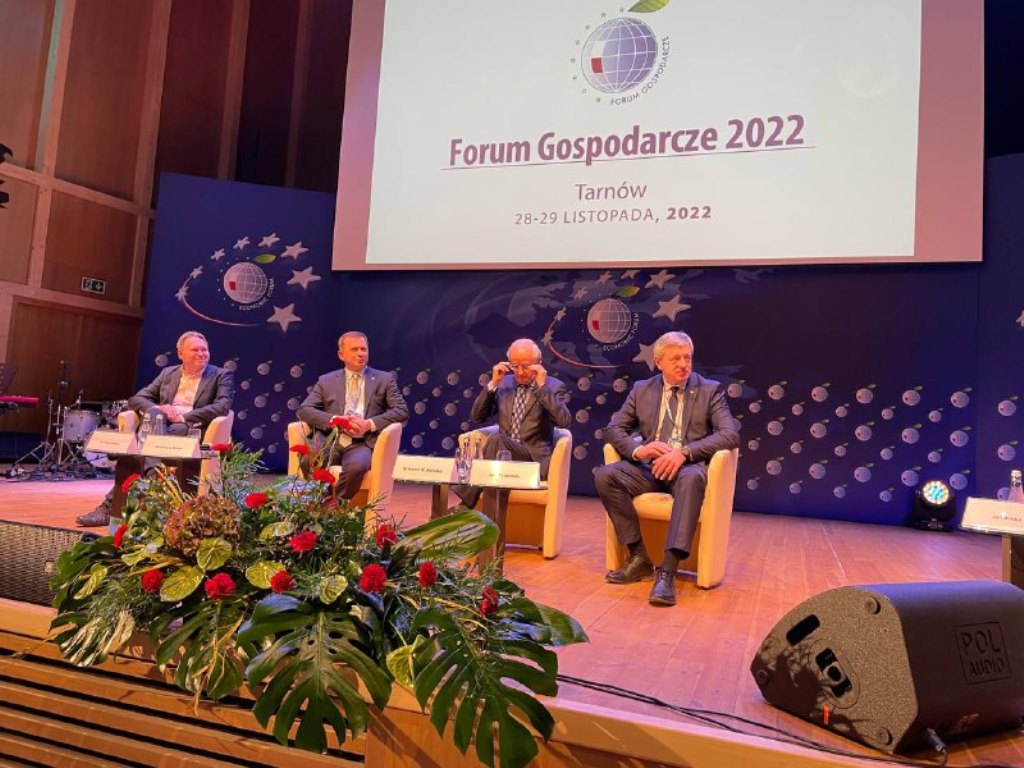 Who rules the world at the beginning of the 21st century? The European Economic Forum 2022, which was held in Tarnów (Republic of Poland) on November 28-29, ended with a plenary session on this topic. Rector of Precarpathian National University Ihor Tsependa took part in its work.

The economic forum, organized by the university’s long-time partner, the Foundation of the Institute of Oriental Studies, whose scholarships have been awarded to the best students of Precarpathian National University for five years. This is  a platform for discussions by an authoritative expert environment of the key problems of the European economy, which, after the negative consequences of pandemic restrictions, is now faced with even more serious challenges related to the war in Ukraine. Several dozen events took place on November 28-29: debates, plenary sessions, reports, presentations and thematic blocks. The participants discussed such key issues as: political security, energy security, reindustrialization, digital economy, electric revolution in the automotive industry and climate policy.

Therefore, summarizing the two-day work of the Forum in Tarnów, at the final plenary session, the rector of Precarpathian  National University Ihor Tsependa, together with the rector of  Krakow University of Economics Stanislaw Mazur, professor of the University of Kozminski, former vice-premier of the Republic of Poland and Minister of Finance Grzegorz Kolodko, professor of the University of Warsaw Tomasz Grossem reflected on in response to the question of the moderator – Polish politician and publicist Jan Rokita: who or what currently rules the world?

Is it money, knowledge, power, access to strategic resources and technology, or something else?

After all, the world has already radically changed after February 24, 2022. Are the upheavals in the world order only a temporary crisis or are they the beginning of a new era – a multipolar world in which Ukraine’s voice will be heard louder and louder?

In particular, according to the rector of the Precarpathian  University, the main thing that the European Union understood after February 24 is that not money, but European and civilizational values rule the world. Because Ukrainians have been dying every day for 9 months, not for money, but for their Motherland, defending the legal right to live freely in their independent European country.

“We need to think about the interests of the world, not personal interests,” remarked Grzegorz Kolodko, a professor at Kozminski University, former vice-premier of the Republic of Poland and minister of finance, in turn. In his opinion, the war in Ukraine can end very quickly if NATO and the EU stop thinking about personal interests and start thinking about the interests of the world. “There is no place in the world now for either one hegemon or two,” emphasized Mr. Kolodko, reflecting on how many blocs the modern world is currently divided into by interests.

Stanislav Mazur, rector of the Krakow University of Economics, told the participants of the Forum in detail how big European business reacts to the continental war in Europe. And in connection with his fears and negative forecasts, there are currently no simple answers to simple questions, Stanislav Mazur assured.

Warsaw University professor Tomasz Grosse partially agreed with this, insisting that the world will never become consolidated. He analyzed the existing geopolitical concepts of the further development of events.

Rector Ihor Tsependi was given the last word by the moderator to summarize the final discussion of the Forum.

“The war should open the eyes of the whole world. Do we play by values or do we live by values. The Western World should talk about this,” summed up the rector of Precarpathian National University.